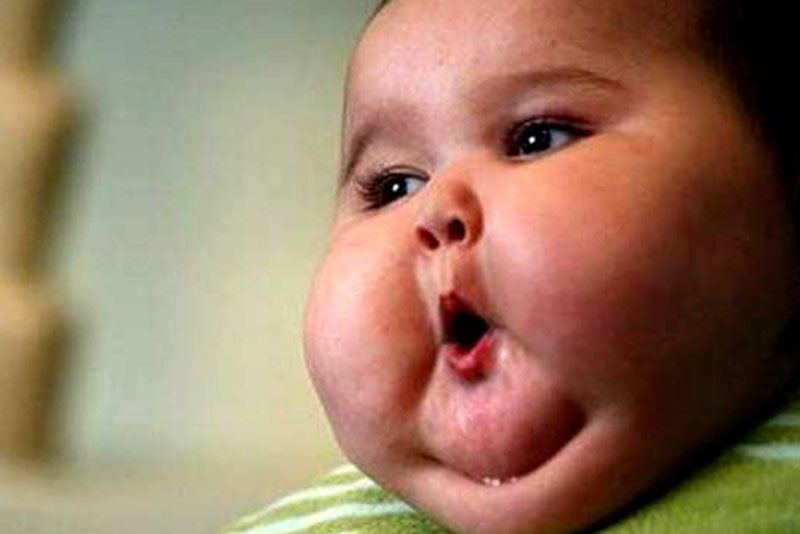 Childhood obesity has reached pandemic proportions in developing countries, with the World Health Organisation projecting that up to 70 million infants and young children will be affected globally by 2025 if the problem is left unchecked. Turning our kids from fat to fit requires conscious and targeted action, but even small lifestyle changes can make a big difference.

Besides being visually pleasing, the soft folds of fat on a baby’s thighs and a child’s rosy chubby cheeks have all come to represent youthful health and vitality. Specialist baby photographer Anne Geddes continues to sell millions of books and calendars that feature adorable plump cherubs, reinforcing the universal sentiment that such subjects will always be cute and popular.

With such widespread approval, being chubby as a tot is almost becoming a rite of passage during childhood. It comes then, as no surprise that parents nowadays don’t appear particularly concerned that their little ones are growing in girth. “It’s just puppy fat”; “They’re big-boned”; “The weight will eventually fall off”; “I can’t bear to see him hungry”—are just a few commonly-heard excuses from parents that fly in the face of the truth, even when it has become apparent that their child is of a larger-than-acceptable size.

It’s not just blasé attitudes towards growing waistlines that have contributed to the problem, which has also lost much of its social stigma now that fat has become the new norm. Insomuch the economic growth and prosperity enjoyed by modern societies have created a corresponding set of lifestyle problems, chief among these the literally burgeoning problem of obesity. According to the World Health Organisation, more than 42 million children under the age of five were overweight in 2013, and it’s a trend that is especially prevalent in developing nations.

Snowballing health risks
Naturally, children should, and must, gain weight through the process of physical growth. Growing children require a higher intake of energy to help them optimally develop during their formative years, but, just as with adults, if energy intake exceeds energy usage, the child will put on weight.

Contrary to some parents’ mistaken belief that “puppy fat” is normal, excess weight gained during childhood does not automatically fall off when the child grows older without the adjustment of dietary habits and introduction of exercise. Doctors and nutritionists have highlighted that overweight and obese children have up to an 80 percent chance of remaining that way into adulthood. In fact, the more overweight the child, the greater the risk of developing serious health problems, both now and as an adult, including potentially life-threatening conditions such as bowel cancer, diabetes, strokes, heart conditions and high blood pressure.

In addition, there are also psychological problems to consider. Overweight and obese children frequently experience teasing from other kids about their appearance which can destroy self-esteem and confidence, and lead to isolation and depression. These traumatic memories can last for the rest of their lives, and may even trigger them to develop behavioural problems like taking up smoking and drinking alcohol at an early age.

Cause and effect
Consider this: It is very rare for children to be overweight as a result of health problems, but the opposite is true—children have health problems because they are already overweight. Parents whose children are obese or overweight should hence not blame their condition squarely on any existing health problems, unless these have been prior diagnosed by a medical professional and specified as the cause. Even then, using illness as an excuse to explain away a child’s excess weight is not entirely valid, as its impact is negligible. It would be like saying that a child is fat because he has suffered from asthma since infancy (obviously, asthma does not cause weight gain!).

Also, it seems to appear that overweight or obese parents tend to “pass on” their condition to their offspring, suggesting that there may be some genetic or inherited link to obesity. Although this is an area which is actively being studied, no clear evidence has yet been established. Instead, a more likely explanation for childhood obesity would be an unhealthy lifestyle (sedentary or lacking physical activity); consuming foods that are high in fat, oil, salt and sugar; or eating bigger portions and supplementing with processed snacks.

Children often mimic the bad eating habits and activities of their parents; so the phrase “running in the family” would reflect this tendency, more so than genetics itself. Studies have shown obese children have an exceptionally hard time losing weight and following through with lifestyle changes in adulthood—all the more reason why parents should encourage kids to remain physically active throughout childhood.

While it is relatively easy for adults to determine whether or not they are overweight by working out their individual Body Mass Index, this however, is not an appropriate measurement tool for children who are still growing. Charts taking into account a child’s rate of growth in proportion to age and gender are used instead, and paediatricians are also able to make a more accurate assessment of weight gain and development. KK Women’s and Children’s Hospital defines a child as overweight when his weight is 20 percent or more above his ideal weight for height. As a rule, a child’s weight is generally classed as obese if the body weight is more that 25 percent fat in males and 32 percent fat in females.

Winning the battle (of the bulge)
In 2012, scientists from Columbia University released the results of a study that claimed that eliminating an average of just 64 calories a day from children’s diets would be helpful in reducing obesity. (The 64-calorie difference between consumption and expenditure is just an average for the population.) The researchers predicted that without this simple caloric reduction, by the year 2020, the average American youth would be nearly 1.8kg heavier than a child or teen of the same age five years ago, and more than 20 percent of kids would be obese, up from 16.9 percent today.

Naturally, heavier children would have to reduce more calories and increase their amount of physical activity, but the researchers still believe that this daily 64-calorie reduction would “make a big impact in reducing obesity rates”. And what would be equivalent to this 64 calories? Think a tablespoon of honey, one cup of cheese popcorn, half a cup of apple juice, one egg yolk, or one slice of white bread. Doesn’t seem hard to achieve, does it?

Seeing how a few small measures could make a big impact on weight in the long term, what else can parents and caregivers do to prevent childhood obesity? Above all else, it should be remembered that prevention is always better than cure. Here are 10 other simple strategies:

5.  Teach your child to appreciate his food by eating slowly and pausing between mouthfuls.          This eating technique will not only help in digestion, but it will also help their brain to more            accurately register when their stomach is full.

6. Involve your children in grocery shopping. Use outings to the supermarket to highlight to           them healthier choices and how these foods can benefit them. You needn’t deprive your kids         of tidbits either. Instead, this is also a good opportunity to teach them about moderation and         which foods constitute as regular staples to meet nutritional requirements.

7. Cut down on screen time and encourage more outdoor play. Suggest taking up a physical           sport or get healthy together as a family with regular outings to the swimming pool, park or           jogging track. Aim for at least 30 minutes of daily physical activity per day.

8. Speaking of doing things together as a family, when making any dietary or lifestyle                     changes to your child’s existing habits, ensure that these are done inclusively with                 other family members. This is so that your child will not feel isolated, singled out or made to           feel like something is wrong about him or that he is the cause of a problem.

9. Remember to satisfy your child’s emotional needs throughout with love, warmth,                        support and encouragement. This sense of security helps enhance children’s self-esteem                so that they forego any need to rely on food as a source of comfort or stress reliever.

10. Be a positive role model. Remember that most kids think of their mummies and daddies             as their personal heroes, so make the conscientious and conscious effort to walk the talk               as much as you can when dispensing advice.  Besides, kids learn from example too, so if                 you set good ones and demonstrate them, they are likely to follow your lead!